Beat Your Enemies and Save the Tower – Defen-G Astro 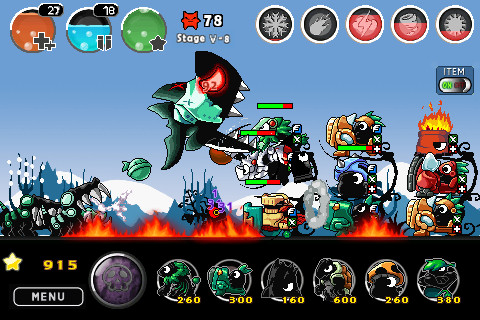 Adventure games are generally well designed with appealing graphics. However they also need a convincing concept to justify the graphics and attract players. Today I tried an iPhone game that has an interesting concept.

Defen-G Astro prepares players to enter the battlefield by narrating the story of a galaxy not so far away. This is a place that symbolizes the origin of life. The players will be taken to that setting, where they need to defend Tower of Atea from the army of vile alien creatures. Yes, it looks a bit like an ordinary adventure, but Defen-G Astro is filled with a lot of interesting characters to make it a grippy game.

There is a variety of creatures available to attack and to defend. The players need to place the soldiers to stop those vile creatures from attacking the tower. The game ends once the villains make the tower to fall. Defeng-G Astro is not all about acting fast, but the user must also think strategically about the units and types of warriors they need to use. This game has three levels – Normal, Hard and Crazy and there is a star sign design to guide the game proceedings.

Defen-G Astro has several packages available for in-app purchases such us Guardian Package, Total Package and Recovery Potion Package. This app also has a website to explain the characteristics of all those beasts. I played it a few times, but it looks like Defen-G Astro is loaded with too many characters to know all. It also provides a detailed guidance with an interactive tutorial. That would help newbies like me.

With all those Sweet Beans and Sluggard Monsters, Defen-G Astro can really impress adventure lovers. This game is compatible with the latest iPhones and iPads running iOS 4.1 or higher.