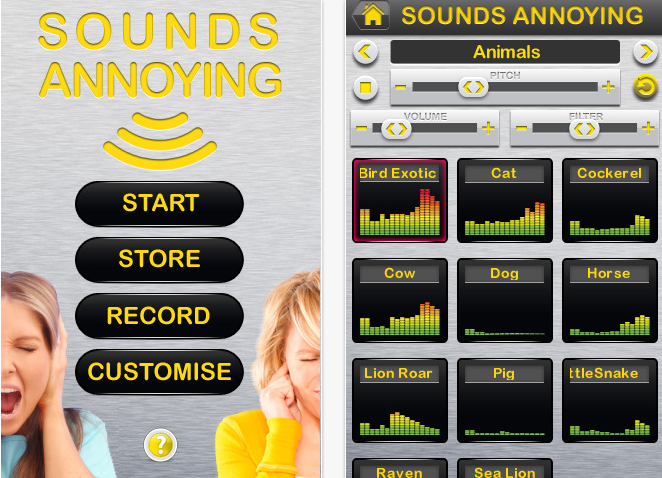 A group of us got together last week to make plans for a friend’s birthday party. We were thinking of a wacky surprise that would have everyone in splits. That’s when my cousin suggested Sounds Annoying and we downloaded it right away. We couldn’t have asked for a more rollicking celebration.

Sounds Annoying is an iPhone app that has over 80 irritating sounds. It is the perfect choice if you are looking for some amusement with your friends or colleagues. The sounds have been grouped under categories like Alarm, Animals, Instruments, Object, People, Strange, Tools, Transport, War etc.

There are features like loop, stop and volume and filter controls to help you customize these crazy sounds. You can choose to startle a younger sibling with the ear-piercing sound of a man screaming, irritate your friends with the jarring sound of a drill or get the laughs going with some continuous sneezing.

We had enough and more fun trying out the different sounds on this app. We used it to set off a fire alarm as our friend blew out the candles on her cake, bring barking dogs into my brother’s room and made our parents panic with some gun firing at night. You can imagine the confusion and laughter that ensued.

Sounds Annoying ensures hilarity, annoyance and hours of laughter. The fun we had that day was much more than what we had planned for. We used this app for our party games too. Who could have thought we could play musical chairs with some funny sounds, instead of music? By the time the party ended, most of my friends’ voices had turned hoarse after all the laughing.

No Responses to “Sounds Annoying – Fun and Laughter Ensured”