Stopmotion animation was always my favorite visual effects seen on the movie. I used to think of making my own stopmotion clip to show it to my friends, but it isn’t that cheap. Here StopMotion Recorder an iPhone app that brings in the pretty same effect from your iPhone camera. A very useful features are build in to take decent Stopmotion video through your iPhone camera. 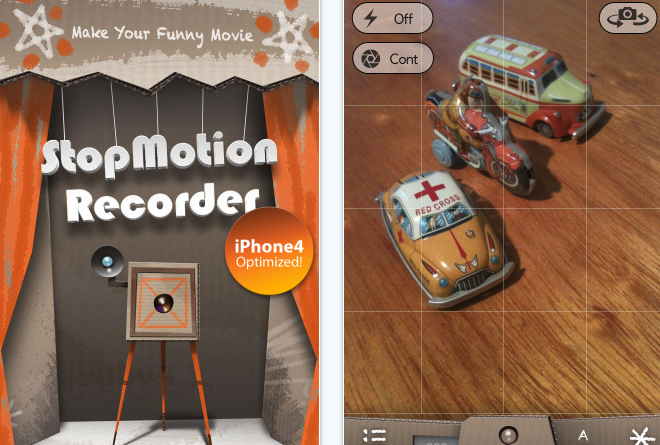 StopMotion Recorder app is capable of combining all the stills taken into a movie. The multiple times you shoot a photo with different actions can be later added to the app to produce the stopmotion effect. The best feature in StopMotion app was the light overlay option to properly match the previous stills without any confusion. So if you found any misplaced image, you can remove them off to align the stills on order. The app has lots of options to shoot image and sometimes its really messy to utilize the proper features in it. It was good to have apps like StopMotion Recorder to make a stopmotion video, which is pretty decent compared to the original way of making and for app, the output video quality is really good with the iPhone’s camera.

Ultimately instead of spending hundreds of dollars in making the stopmotion video, just afford for this $0.99 app to produce a decent stopmotion experience from your iPhone.