Santa Mania is everywhere and at some point of time we get frustrated with hearing too much of Santa news everywhere. If you felt that, then I recommend trying SantaSlap app for your iPhone, iPod Touch and iPad. SantaSlap is a funny app that adds the fun of slapping at Santa with many different weapons available on the app. 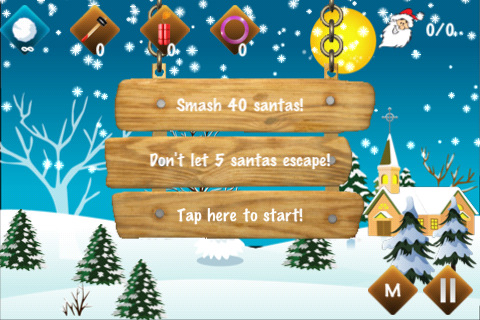 Santa Slap has many levels on it, so initially it starts off with an easiest level and then it gets tougher. Each level start with a target to go the next scene. The homepage of the app has three menus for Start, Challenge and Instructions. The Start and Challenge are more or less similar expect the time trial that is available with the Challenge mode. The game is not so addictive, but it depends upon people how they take it. To me, I did expect a lot from this game that offers some interactive experience.

The game has four weapons to slap the Santa. Each weapons is unique and its has its own style of attacking the Santa. I wish there could be some more funny weapons to make this game more funny. What I seriously miss was the sound effect when a Santa is being slapped. The game doesn’t save automatically if someone closes the application, especially for the iOS 3x users when they get a call while playing the game.
Besides these little drawbacks the game is still funny enough for kids to slap the Santa. So while making your Christmas purchases I do suggest SantaSlap to be included in it and let’s try something different from the usual way.

No Responses to “SantaSlap App Review”