Can’t Say That! – Challenge Your Friends With Mind-Boggling Clues 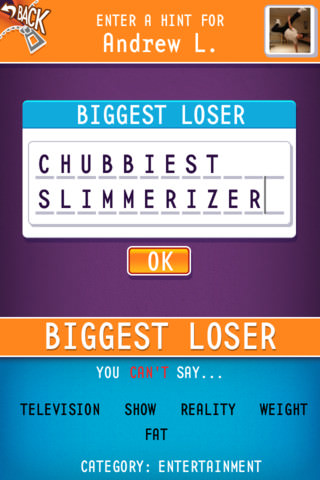 Everyone likes to play word games. Word games always have something new and exciting to offer. They can be played with friends, family or even on our own. Here is an exciting word game to sharpen your thinking skills and improve your vocabulary. Can’t Say That! is an iPhone app which will make you put on your thinking cap. You have to find words based on tricky clues and give clues to your friends to help them find words. Remember that giving clues is not an easy job in Can’t Say That!. Let’s see what this app has to offer. 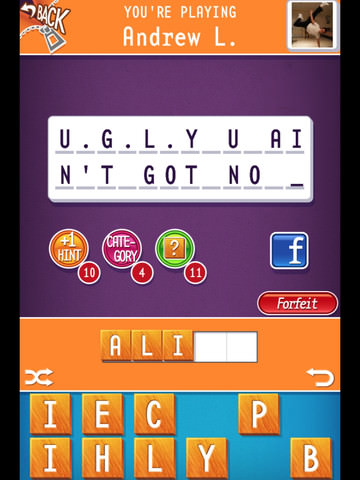 What is the app about ?

Can’t Say That! is a word game that tests your vocabulary. The idea of the game is to give your friends some clues which will help them in finding some words. The challenge lies in doing so by avoiding the usage of certain clues which make things obvious. What makes the game really interesting is that you can kindle the curiosity of your friends by giving them out of the ordinary clues that tickle their funny bones and stimulate their mind. Similarly, your friends will also be giving you some clues to keep you guessing.

How does the app work ?

There are 3 options, Facebook, E-mail and Random, through which you can start the game. The ‘Random’ option makes you log in to the game with a default user name. There are 3 different modes such as Easy, Medium and Hard. You will be rewarded with coins according to your performance in each mode.

Your friends will guess the words based on the clues you give them. But this is where the catch is. There are some words which cannot be used as clues. For instance, to find the word ‘punching bag’ you should not use the words box, practice, gym, hit or pummel, while giving clues. Similarly, for the word ‘outcast’ you aren’t allowed to use the words loner, society, reject, exile or sigma, as clues. This makes the game all the more exciting, competitive and tricky. Giving apt clues will be a challenge and guessing the right answers will involve a lot of brain racking. You can start a new game whenever you want. There are 3 power-ups, Hint, Category and Letter power-up, to help you. If you are totally stuck, you can post the clues on Facebook to get additional help.

Special features of the app:

Can’t Say That! has a special option named ‘Stat’. This option discloses complete statistics of the games played by all your friends. It contains the longest streak list, details of the usage of power-ups, an option to delete a game etc. The tutorial section is comprehensive and helps first-time users get a clear understanding of the concept of the game and the rules.

Can’t Say That! has a free version and a paid version which costs $2.99. The app is compatible with iPhone, iPod touch and iPad and requires iOS 4.3 or later.

No Responses to “Can’t Say That! – Challenge Your Friends With Mind-Boggling Clues”