Blow Your Enemies With War Of Words Free 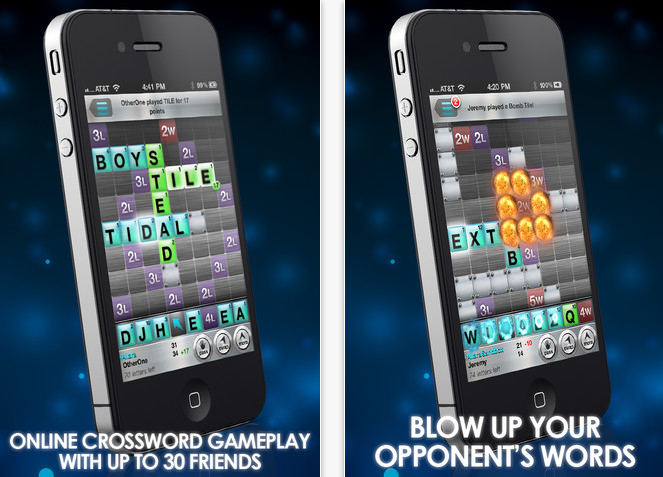 I have played many crossword games like Scrabble, but I’ve never seen such a game in which players can bomb and steal the other players’ words. You can do these kinds of things with ‘War of Words Free’ by Wolf Studios, LLC.

I have played many crossword games like Scrabble, but I’ve never seen such a game in which players can bomb and steal the other players’ words. You can do these kinds of things with ‘War of Words Free’ by Wolf Studios, LLC.

After getting into the gameplay, you will find War of Words is not like any other normal crossword game as it has got a lot of actions. This game has action tiles to let you do all you want to push back your opponents and win the game.

I have never seen action tiles like them in any other game. Just start the game by logging into the Game Center account, so that you can play with your online opponent. When I first started playing it, War of Words seemed to be like Scrabble. However, after exploring it, I found it differs in many areas.

Now let us see about the various action tiles of the game. With the Bomb Tiles, you can destroy your opponent’s letters. Thief Tiles allow you to steal words from other players. Using Land Mine Tiles, you can hide a bomb from others. Multiplier Tiles multiplies your scores for letters and words in eight different ways. Reverse Tiles will allow you to play the words in reverse order. Using the Start Over Tiles, you can begin a word anywhere you want and the Extra Turn Tile helps play two turns continuously. If you want to block important places on the game board, use the Barricade Tiles. Shield Tiles protect a particular area from your opponent’s reach.

There are 24 various board layouts to play. You can play with 30 friends online, by using the ‘Pass and Play’ through Game Center. The app allows you to start a ‘Random Game’, so that you can get into the game faster. You can compare your score with your friend’s score, using its ‘Online Leaderboards’. It has got 90+ levels with ‘Word Definitions’.

The game has got a fantastic and attractive user interface. It is socially interactive, as it has Game Center and online chat. You will be intimated on your turns through push notifications. You can invite your friends from Facebook, Twitter and email or even with the Game Center nickname. However, it has got many exciting features and a detailed help section, but the gameplay won’t be easy for the first time players (like me).

Even though it looks little bit similar to other games of this genre, War of Words is very naughty. I recommend this app to naughty crossword game lovers.

No Responses to “Blow Your Enemies With War Of Words Free”