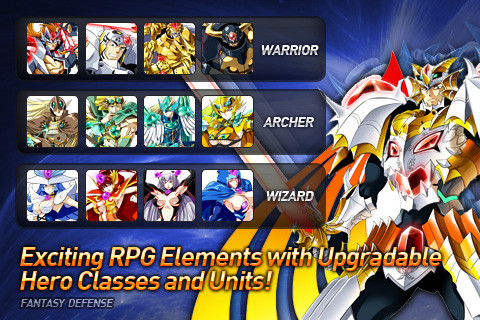 iPhone is a great device for playing games that have extensive graphic works. It is fast and the display is very clear than many other devices. It is good to see developers are making the most of it by creating some great apps. Let me review an app that has some wonderful graphics.

Fantasy Defense is a tower defense game where the ultimate objective is beating the ruler of monsters – the Wraith King. The players will be provided with units such as Warriors, Archers, Wizards, Brandishers and Champions and they can also upgrade these basic units as the game progresses. Players may need to make some in-app purchases to equip these units.

After launching the game, it starts-off with the tutorial and the successful completion gains 300 points to the players. In this game, all they need to do is place their units at the appropriate positions, so that no monster escapes through the gate. If they let 20 monsters to escape, they would be considered failed in that stage and they need to replay it.

There is also a gripping introductory tale in Fantasy Defense. However, it is a bit too long and the device would be locked, if the player has set it to auto-lock after a few minutes of inactivity. It is also hard to differentiate the units. The icons are useful, but the developers could have worked a bit more in this area.

There are also some in-app purchases available to enhance the power and performance of units. If you love adventures, you can certainly try Fantasy Defense and of course, this is the right time to do.