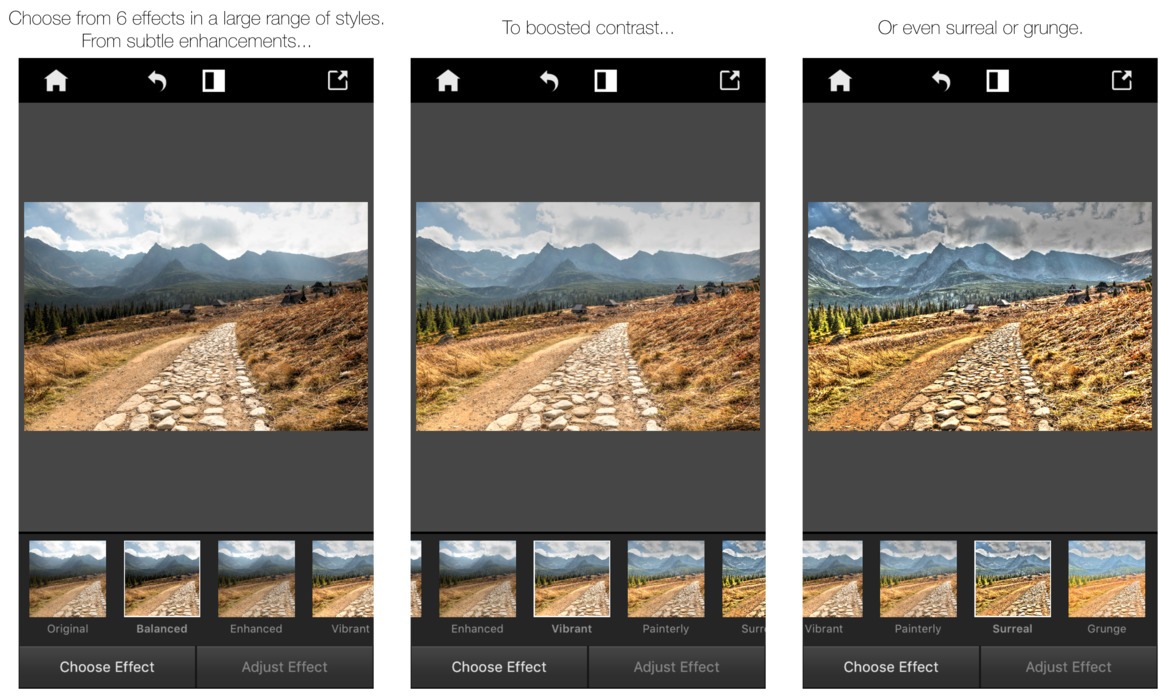 Most apps that allow you to edit and enhance photos focus too much on user convenience, to the point that they almost always fail to provide the user a satisfactory number of options to choose from in their editing needs; some even sacrifice quality just to give users the illusion that they are doing actual enhancements to their media, may it be a photo or video. With Photomatix FX, though, you can be certain that you are actually getting a photo editor app that you deserve.

What should be noted beforehand is that Photomatix FX offers up to six primary effects. These are one-click effects that you can add to your photos to make them fit your intended theme or mood or to simply make them more aesthetically appealing.

These effects are categorized as Balanced, Vibrant, Surreal, Enhanced, Painterly, and Grunge. Each one of them is given a preview located below your chosen image, and you need to only tap one of them in order to be given a better view of the effects that they add. What’s certain is that each one adds a totally unique overall look and atmosphere to any photo of your liking.

You may upload any photo of your liking from your device’s storage, and one aspect that certainly makes this app stand out is its simple interface. There are also a few more tweaks that you can add to your image before finishing it. For instance, located below the effects categories are icons of various adjustments that you can include. You can control brightness, saturation, warmth, and contrast.

Not satisfied with your image’s size or do you want to excise a portion that mars its beauty? Know that this app also offers a cropping feature, besides being able to rotate it as well. As you edit, you are allowed to have a great view of what the image looks like before and after your modifications have been made. You are also allowed to save your work in different resolutions as well as to open it in another app if you intend to add more enhancements to it. The app also offers support for direct sharing to Facebook, Twitter, Instagram, and Flickr.

Photomatix FX’s uniqueness from other apps that allow you to enhance photos is highlighted by its variety in effects options as well as in its allowing users to make before and after comparisons between the original image and the one that they have modified. The latter feature can rarely be found in other photo editing apps, but it is actually a very important aspect of this activity as it gives the user a good gauge of just what kinds of improvements the image really needs. Also, pretty much every important action you can do is presented to you in a manner that makes sure that you would be able to save as much time and effort as possible while using the app.

No Responses to “Photomatix FX: A Better All-Around Alternative to Your Photo Editor App”