A Trip to One of the Oldest Buddhist Sanctuaries in the World… Right On Your iOS Device! 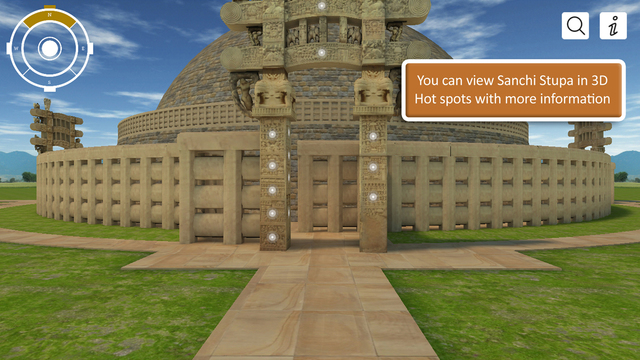 Sanchi is the famous site of the oldest stone Buddha sanctuary in India called the Great Stupa. Since its commissioning by Emperor Ashoka as far back as the 3rd century BCE, numerous additions were incorporated into the original structure housing the relics of Buddha, and these expansions continued up to the 12th century A.D. Besides serving as a resting place for the great religious figure’s relics, similar relics of his chief males disciples, Sariputta and Maudgalyayana, are also housed here as well as the remains of later Buddhist Masters. 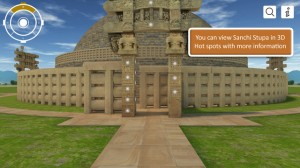 This is why, being one of the major shrines of Buddhism in the world, it is no surprise that thousands of people, pilgrim or otherwise, flock to its gates to gaze at this awesome work of architecture and marvel at its fabled inscriptions. If you’re curious about this popular site too, but can’t travel there personally, then you would certainly love Stupa Sanchi 3D.

With this iOS app, you won’t be needing a tour guide as well because every bit of information that you need to know about the Stupa can be acquired by simply navigating through the app’s 3D rendition of the site. You need only to use your finger to do the said navigation; dragging it vertically will make you move forward or backward, while dragging it horizontally allows you to rotate the view. If you want to look up or down, you need to do the dragging motion using two fingers. If you still can’t get a hang of the controls, then don’t hesitate to use the app’s help screen.

Dragging your fingers closer to the structure would reveal hotspots, which is essentially where you can get more in-depth information about each of the notable sections and parts of the Stupa (the reason of its addition, as well as its symbol and significance). There are numerous hotspots strewn all over the 4 gates of the Stupa; all of which can reveal trivia about the site as good as any seasoned tour guide can. 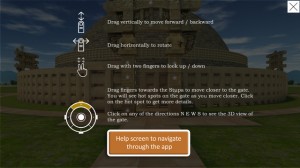 If you want to search for a specific part, then you can use the app’s built-in search functionality which is located on the upper right portion of the screen. This feature only serves to highlight the goldmine of information that the app has about the Stupa, for not only will you be gaining more detailed data about the site this way but also learn of the various stories that surround the making of each segment.

It is obvious that what makes this app stand out from other apps of its kind (and there arguably isn’t a lot) is its sheer attention to detail, as well as its vividly accurate and exquisite presentation of this truly amazing world relic. The only app that is probably closely related to are tour-guide-type apps such as the “The Great Stupa Sanchi Tour”, which, for the wealth of information it possesses, is ultimately lacking in the interactive value that Stupa Sanchi 3D provides its users. Ultimately, a real must-have for heritage sites enthusiasts, history and religion buffs, or any inquisitive person interested in ancient history and architecture.

No Responses to “A Trip to One of the Oldest Buddhist Sanctuaries in the World… Right On Your iOS Device!”