TruGlyph: Connect with People through Drawing and Visual Association 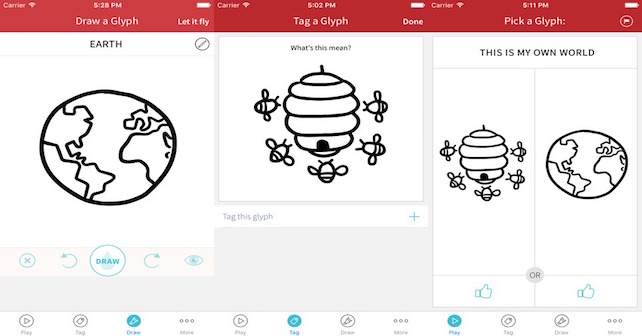 Since ancient times, glyphs have been used by our ancestors to denote a specific meaning. They serve as symbols that require immediate understanding of what they are depicting. They are basically language that makes use of images, which are then associated with words. This app capitalizes on this by serving as a social networking platform from which you can interact with other people through glyphs alone.

This is because in TruGlyph, you can draw your own glyphs and share them with other users. There are three main features that the app offers. All three can be readily accessed in the bottom portion of the app’s interface. The first is “Play”, which is the default mode that starts after launching the app.

In this mode, you are immediately presented with a glyph or drawing, with the header “Pick a Tag”. Below it are two tags that is closely associated with the image. You need to tap on the Thumbs Up symbol below a tag to make your choice. Once done, you are taken to the next glyph. Sometimes two images are presented and you have to pick the best one that suits the tag that is given.

Next is the “Tag” mode. This one involves being presented with a glyph as well, but is more concerned with tagging the glyph rather than guessing what it symbolizes. You can associate any type of subjects, themes, or categories with a glyph, but you can only give it up to three tags. The tags that you’ve chosen will be shared with other users of TruGlyph, which the app then proceeds to use in “Play Mode”.

The last mode is “Draw”, which is essentially where all the drawing of glyphs takes place. Every glyph that you draw can be based on a given tag or word or you can choose to give your drawing your own tag. Once done, you can start drawing your glyph, which is promptly saved in the TruGlyph system for sharing. As you progress in either of the three modes, you will be rewarded with badges. They can be viewed in the “More” section of the app. Different types of badges are available for each mode, so if you want to collect them all, you have to make use of all three.

TruGlyph calls to mind popular drawing apps like Draw Something, but the connection is very limited and vague, to say the least. For one, the social networking factor is totally absent in the latter. The only similarity lies in the sharing and guessing of what you and other users have drawn. With that said, TruGlyph really deserves to be commended for making use of something as primordial as visual language (glyphs) as social networking medium. In the process, they have invented an original way to get people to interact with one another. In fact, the app’s appeal is undoubtedly linked to our basic need to communicate and connect through language, which in this case, is primarily visual.

No Responses to “TruGlyph: Connect with People through Drawing and Visual Association”