Earigami: Spice Up Your Chats with Voice Text Messages 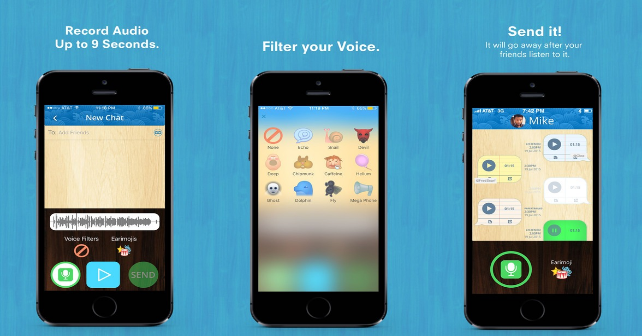 There’s no other conversation that is more engaging than one that involves sound. After all, a person’s voice, especially someone whom we know, has inimitable nuances that pretty much never fails to motivate us to interact with that person. That’s probably what the developers of Earigami had in mind when they tailored the main feature of the app on allowing users to send recorded voice text messages to each other.

With Earigami, users are given the opportunity to send a short audio clip (a maximum 9 seconds long) to their chosen phone contacts. Take note, though, that you still have to invite your default contacts in order for them to be able to use the primary features of Earigami. Once everything is set, you can then begin recording your message.

You only need to press the Record’ button and start recording a short message. Afterwards, you can send it any time or choose to edit it first by adding various voice filters, effects, and the app’s so-called Earimojis. As can be readily perused from their name, these are essentially the more familiar emojis presented in sound form. Earigami has incorporated unique sounds that range from thunder, magic effects, rain, to name a few.

You can choose to add the Earimojis and voice filters to the clip you’ve recorded, ensuring that they fit you’re the overall meaning of your message. Of course, the effect would be more palpable and impressive if these additions are placed in the perfect parts of your message. From these facts alone, one can readily ascertain that the developers of Earigami really intends to make chatting more fun, interactive, and exciting.

Earigami certainly stands on its own pedestal, especially if we are to consider its Earimojis, built-in audio recording capabilities as well as the ability to edit the voice messages. It prioritizes the convenience of the user, as most of them would undoubtedly view recording their voice every time just to send messages a complete hassle.

This is not at all the case in Earigami, as everything is pretty much seamless and messages can be sent quickly once the user gets the hang of it. Equally better is the fact that it’s pretty much the same on the recipient’s part as he only needs to tap the ear icon next to the person they’re chatting with to hear their message. Take note that the app keeps track of all the chats that you are doing with your contacts as well. Ultimately, the value of the app lies in the fundamental importance of voice message: it elucidates a message which would otherwise be prone to misinterpretation if it’s sent in pure text.

No Responses to “Earigami: Spice Up Your Chats with Voice Text Messages”