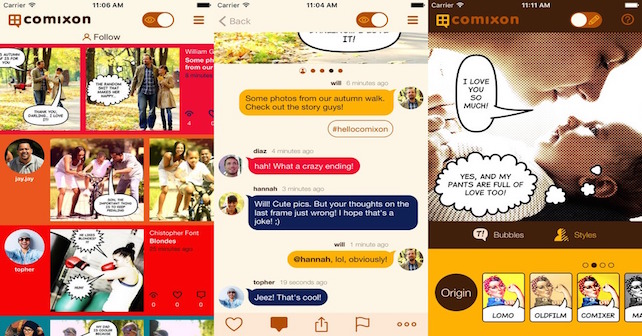 Do you like to make comic strips out of the pictures you take? Comics are always a good source of entertainment. They are also a great outlet from which you can exercise and exhibit your creativity, writing, and story-telling skills. And, like conventional stories, they could deal with humor, impart inspiration, and even reveal something profound about life.

Its no surprise then that an app has been created for the sole purpose of creating comic strips from photos that you own. Comixon is not just an app from which you can design comic scenarios, though, because it’s actually part social network as well. The primary purpose of the app, after all, is to allow users to readily share their work with anyone who is also using Comixon.

In this kind of platform, you are not only able to instantly create your original comic strips, but you would also be able to easily impart your work with your friends. And, as in the standard social network setting, you are also given a feed of your own friends‘ works, as well as that of other people.

As for how the app is laid out, it’s actually divided into two separate parts (or zones, as they are termed by the app’s developers). These zones are the Writing Zone and the Reading Zone. In the former, the user would have only the tools and features that he needs to start creating his own comic strips. Its interface is very simple as the tools are divided into two categories only: Bubbles and Style. The available speech bubbles come in different shapes and forms and are highly reminiscent of bubbles found in traditional comic books, which is a real plus. The art styles, on the other hand, can be incorporated into a picture in order to give it a more comic-y look. Take note that you can only upload up to four photos (panels) for editing.

On the opposite side of the spectrum, which is the Reading Zone, is where all the social network activity takes place. The feed, as befits the theme of the app, sports lively colors, which serve as good backgrounds for comic feeds. As the works from different authors from around the world trickle in your feed, you can easily chat with their creators or your readers to leave your comments and opinions regarding their work or yours. Each comic strip that is finished is automatically turned into postcards for easy sharing. The division between the Reading and Writing Zones is very convenient, as meshing the two would undoubtedly make it hard for users to utilize the app’s primary functionalities.

Comixon’s concept is, indeed, very original, which is why it could prove to be difficult to make the slightest comparisons of it with other apps in the App Store. While it bears a similarity to apps that focus on creating comics out of pictures and other images (the app Photo Comic Bubbles arguably shares some of its features), its social networking side is something that its developers could boast of as truly their own. And, it’s this very feature that really makes Comixon a very useful app to have, especially for people who enjoy reading, writing, and sharing comic strips.

No Responses to “Comixon: A Social Network Designed Solely for Comic Strip Enthusiasts and Storytellers”