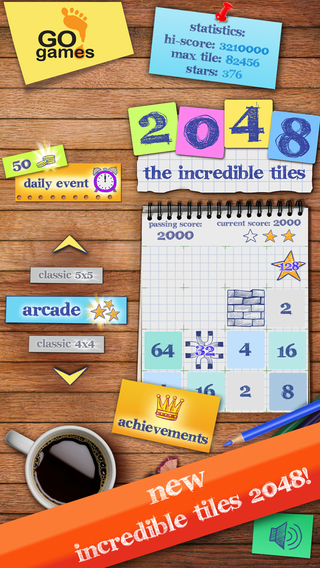 The Incredible Tiles 2048 is an iOS title developed by Go Games Ltd., being compatible with both iPhone and iPad. This game follows the lead of the classic 2048 game where player’s objective was to add numbers on vertical or horizontal tiles for reaching higher sums on one tile, up to 2048. The Incredible Tiles 2048 develops on this principle and gives players a variety of power-ups to choose from as well as helpful options located in the game’s upper toolbar. 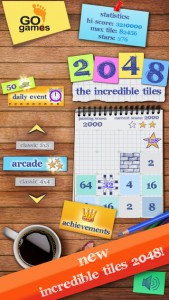 The original 2048 game only stopped players at the point when the 2048 sum was reached on one tile. However, The Incredible Tiles 2048 features more than an empty table; it provides different types of blocks which appear randomly such as bricks (prevent the player from moving a number to the specific tile), enlargers (increase current number), springs (take the number to the bottom row), teleportation (move the number to a tile chosen by the player), dividing (divide the number: e.g. 8 divided by 2 = 4), multiplying (multiply the number: e.g. 8 multiplied by 4 = 32).

The Incredible Tiles 2048 features a variety of power-ups which help the player accomplish final goal more easier. Thus, with the aid of the buttons located in the upper toolbar players can erase a tile, erase bricks, undo the last move or roll a dice, feature which gives great bonus opportunities such as enhancing current tile’s value by up to 6X. Additionally, at certain points of the game players can stop tiles from appearing, replace tiles or even clear the field altogether (with the exception of the highest number).

While the original 2048 game only came with a single type of gameplay. The Incredible Tiles 2048 also features a level-by-level game mode where players have to compete in 30 different stages and finish each of them. This provides an additional challenge over the standard gameplay, which is also available and can be selected from the menu.

A novelty brought by The Incredible Tiles 2048 lies in the 5×5 game mode, where players have to compete on a 5×5 grid instead of the classic 4×4 one. However, a 4×4 grid can also be selected when desired. 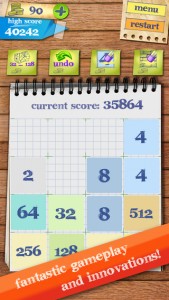 The game benefits from an enhanced design over the original 2048 game, one which is better thought in terms of graphics and comes with plenty of interesting additions (power-ups, different game modes, levels, etc.). The Incredible Tiles 2048 also has a star feature which, based on completion level, awards players with coins. These coins can be exchanged for power-ups and used in difficult situations. The notebook style is a lot more appealing than the original 4×4 grid, and it also makes the game more usable.

The app has minimum requirements hence the reason why it will work well even on older iOS devices. It requires iOS 4.3 or above and it is compatible with all Apple devices: iPad, iPhone and iPod touch. The game has 40.2 MB and it can be downloaded free of charge from App Store.

The Incredible Tiles 2048 is a new and addicting game which builds on the popularity of the 2048 title but comes with new features such as power-ups and different game modes. Given the fact that it is available free of charge and comes with no ads, it is a must try for fans of the puzzle genre.