Tally Board – A Fast and Fun Puzzle App 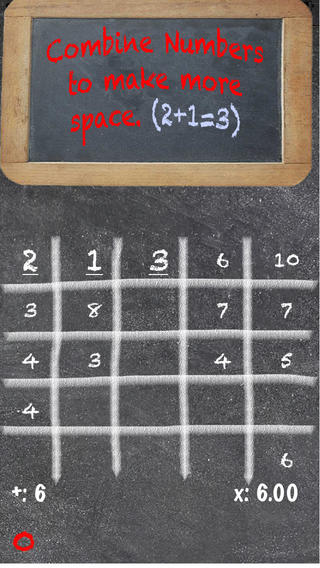 Mathematics and logic are not the first things which come to mind when it comes to gaming applications. Math has the reputation of something which is hard or boring, and most people are happy when they forget it after they finish school. But, in spite of this, the fact is that math offers and incredibly versatile playing field for any kind of game. Tally Board is an iOS game application which was developed to offer an interesting way of using mathematics as the main game mechanics, but it also greatly expanded it. The game is available on iTunes, and needs the iPad, iPhone or the iPod touch to be installed. Also, it requires an operating system iOS 7.1 or any later versions. 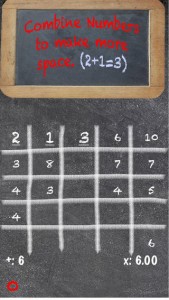 Tally Board is a puzzle game which relies primarily on numbers. Apart from math, the game focuses on the player’s skills with numbers, the logical thought processes, as well as the global strategy skills. All this is set in a very simple gaming environment. The player chooses the level of difficulty (which include easy, medium and hard) taps two numbers on the chalkboard (the main gaming area) to add them up, multiply them or use a nearby third or fourth number.

The number of adding and multiplying moves is in fact infinite, so the player can repeat them as much as they like. By swiping the screen, new numbers appear on the sides of the chalkboard. When the board fills up with additional numbers the player loses while three super powers can help out in these dire situations, and these include a swap tile option, a free move and a hint.

User interface (UI) is very elegantly designed and offers functionality without presenting a lack of more complex options. Because of this, the interface is simple to use and gives a clean overview of the game. Graphics used in the game look very interesting, while an attractive sound effect design elevates the gameplay to a bigger level. When it comes to usability, the app is clearly superior when it is compared to other similar gaming applications in this genre. Its challenging and addictive gameplay, along with an access to the Apple game center means that it will be appreciated the most by competitive players. In other words, this smart and dedicatedly devised strategy puzzle game will be ideal for all those thinking gamers around. 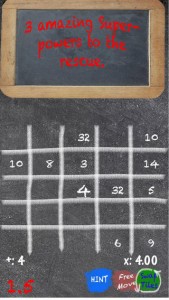 Considering all the features which Tally Board app includes, there is no doubt that this game is simply excellent. From the initial idea to the end results, the creators of this app produced a gaming application which will surely become a role model to other game design studios. This puzzle game has everything needed to last a very long time in the hands of any puzzle player around.

No Responses to “Tally Board – A Fast and Fun Puzzle App”