Tried all those sick iPhone games? Here is Soosiz an extraordinary game for the iPhone. Soosiz starts with a little introduction about the land of Soosiz, where you need to saved the little Soosiz to reach the end. While going towards to the end of the portal, you are interrupted with thorn balls, aliens. Taking all the three little Soosiz to the end will receive gold medal. An addictive 2D game gravitational spinning technology. 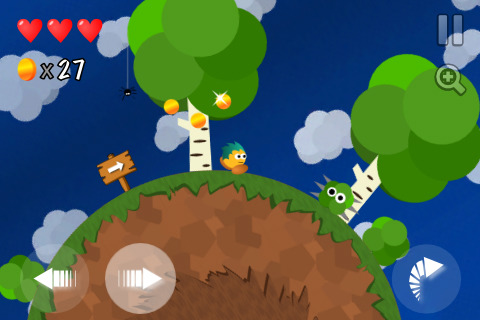 Soosiz has seven different worlds with each world consisting of seven different levels. Each levels has the goal to reach the end along with the little Soosiz, if you fail to take only two of the three Soosiz’s you will be rewarded with silver medel. Starting off from one to four levels the game can be easily played to each the final point, but after the seventh level you need to be really careful for the evils that tries to kill you in the midway.

The game has lot of hidden secret powers, if discovered you can easily dodge through the enemies to reach the final point. Even without those special powers enemies can be killed by just tapping on its head. The hiddens powers that comes on the way is too exciting to enjoy the game to the core. For instance, if you reach 100 coins, you get the power of invisible to blind the enemies and moves towards your goal. The gameplay is well executed and you never feel any sluggish or unfinished works in this game. Grabbing up gold coins will opens up some bonus levels and you never feels like odd and all the levels are unique in its own.

Soosiz controls are dead simple and it never confused while making your move. The gravitational spinning is just an awesome experience that cannot be seen so perfect like that in Soosiz.

Overall Soosiz is excellent, amazing and addictive for iPhone platform. The app is available for free download only today. So grab it soon.