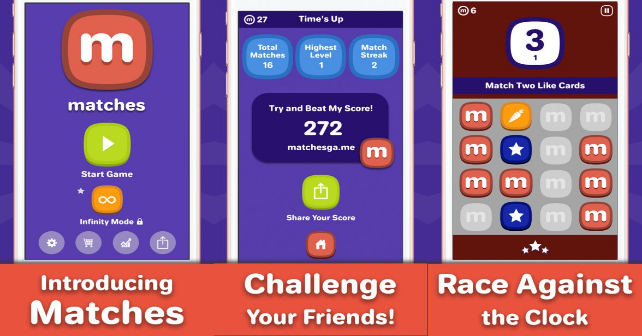 Ever wanted to play a puzzle game that puts your memory to the test? If you’re an avid fan of the classic concepts of Memory Game, then you’ll really like Matches Game. The app has an arcade game-like simplicity that would really get you hooked in no time. For its myriad features and game modes, you’ll certainly find that the game has a lot of re-playability potential.

In the app’s main menu once you open it, you can immediately begin playing by tapping on Start Game. The standard game mode requires you to match as fast as you can the different face-down cards (marked by the letter M) in the board. You objective, in fact, would immediately be made known to you by the sentence “Match Two Like Cards” that is embedded directly above the playing board.

To flip a card face-up, you only need to tap it. Its symbol would promptly be revealed and you simply have to tap another card to reveal (hopefully) its matching counterpart. That’s basically how you score in the game and what you’re supposed to do in two of its game modes.

However, you’ll notice that the standard game mode actually has a timer located on the top-most portion of the gameplay interface. This is where majority of the challenge of the game hinges. Besides testing your memory, the game also makes sure that you’re always at the edge of your seat as you play it. There’s always an inherent time-pressure element that really serves to push you to perform your best and conquer the obstacles that the game throws your way.

Another interesting facet of the game is its inclusion of power-ups. Its icon is located on the bottom of the screen. And once you tap it, the game’s timer will be paused, giving you a respite to decide on the one that you’ll use. There are up to 4 power-ups with varying effects like being able to view for a split-second the entire array of cards in a specific playthrough or freezing time to allow you to get a few extra seconds to complete a puzzle.

Lastly, the game also has another mode called Infinity Mode which you can also access from the main menu. This is basically the easier mode of the app as it virtually removes the time-pressure element of standard play, allowing you to play at your own pace.

There are plenty of apps that have a similar concept as Matches Game. Nonetheless, this doesn’t necessarily mean that it’s not without originality. Its overall theme, card designs, power-up feature, and infinity mode are definitely aspects that really highlight its uniqueness.

No Responses to “Matches Game: Test Your Memory and Puzzle-Solving Skills in This Addicting Featured-Packed Memory Game”