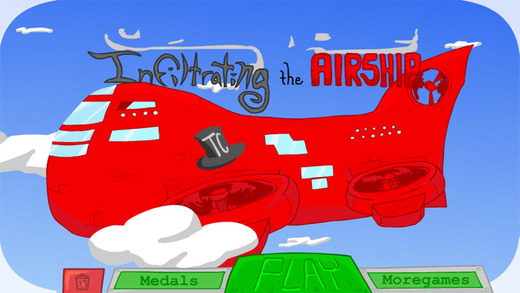 Henry Stickman, the adrenaline junkie main character in such action—packed puzzle games as Fleeing the Complex, Stealing the Diamond, and Breaking the Bank is at it again in lnfiltrating the Airship Free. It is the fourth game in the Henry Stickman series, and like its predecessors, the game tests the player’s grit and decision—making skills. It is noticeably more comprehensive content—wise than the games that came before it, though.

In this game, as the title suggests, you are to guide Henry Stickman as he attempts to gain access to an airborne airship. But first, let’s discuss the design. The game relies heavily on simplistic art that characterizes most stickman games. This art is already apparent from the main menu, where the player is greeted by the titular airship that he needs to board. From here, the player can either choose to play directly by pressing the ‘Play’ button or he could choose to view the medals he has acquired or try out other Henry Stickman games. 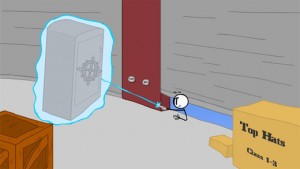 As for the gameplay, if you are familiar with the other titles, you won’t find it hard to familiarize yourself with how lnfiltrating the Airship Free works. Henry Stickman is woken by agents of the Government of the USA and given an assignment to stop the Toppat Clan. The story is automatically advanced by classic stickman animation and dialogue and stops temporarily if the player is required to decide on an action or item to use. Every choice you make has a corresponding animation and unique dialogue. Incidentally, the fully-voiced dialogue still maintains the tongue-in-cheek style that previous titles are known for.

From the outset, you are to decide on how you want Henry Stickman to board the airship. From this point, every option you choose to solve a specific problem that Henry encounters could either end up in failure or advance your progress. There is no single correct option in every scenario, though, and every decision you make has a consequence and inevitably affects the ending. Every action you do also has a chance to reward you with a medal. As a side note, even choices that end up in failure are actually worth doing since it could unlock medals as well. 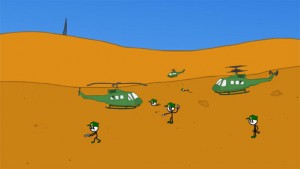 For instance, Henry’s mission in this game is to stop a group of notorious thieves. While there are other options where the game ends once he has stopped them, there are actual special routes you can take that would extend the story further. The key lies in analyzing what your choices every time you are asked to do so.

There is no scarcity of stickman games in just about any platform, desktop and mobile, nowadays. lnfiltrating the Airship Free, since it is part of the Henry Stickman series, focuses more on the decision-making element of action games, with varying end-scenarios that could fluidly shift from comical to wackily glorious. This is the primary element which endears most gamers to many stickman games, and lnfiltrating the Airship Free is no different. For what it lacks in sophisticated design, it more than makes up for in its engaging storyline and the wildly entertaining scenarios it depicts.

No Responses to “Infiltrating The Airship Free: Mission Impossible, Stickman-Style!”