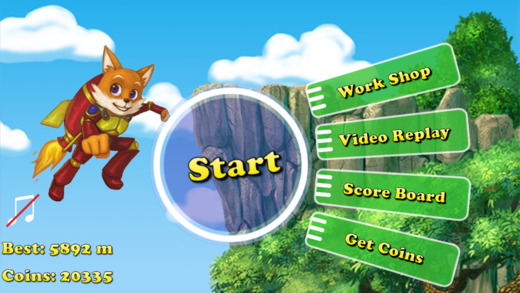 Built on the classic arcade-game style, Fox Tales: Rocket Run takes players through an incredible journey right on their iPhone or iPad. In order to successfully finish this game players need to take control of a fox called “Kizu” which has a rocket striped to his back. This makes the fox fly extremely fast but also provides gamers with the challenge of overcoming different traps, which become progressively harder as distance increases. The game is very addictive and great for those looking forward to challenge their friends for the highest scores, regardless whether online or on Facebook. Here are the key features of this game: 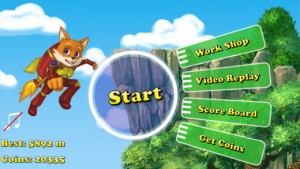 Players can take control of the fox very simply. At the initial launch, the screen can be tapped anywhere as for the fox to begin him run. Then, the finger needs to be held down for continued flying sessions and released when the player wants to lose altitude. Various power ups can be collected along the way including energy boosts, invincibility and coins (which can be used to purchase better flying gear).

Slow down time, attract all coins via a magnet or gain a considerable boost; these are all possible through in-game power ups. The larger the distance travelled, the more chance for the players to meet helpful power ups.

After finishing every game players win a certain number of coins based on the distance achieved. These coins can be used for upgrading the weight system as to enable the fox to reach higher altitudes more easily. They can also be used to upgrade rocket boost which means a better initial start and more coins achieved at once.

Upgrades can be considered as an extra over the in-game power ups, which help you travel a bigger distance more easily. Some will be surprised by how smoothly the fox moves once some rocket upgrades are made.

Coins, the incremental currency of the game can be gained during missions, awarded for different tasks (e.g. connect to Facebook) or bought from the shop.

This game’s graphics are truly well-thought, resembling the quality of console games. Fox Tales: Rocket Run looks great on iPhone 5 and all newer iOS devices, thus guaranteeing that players never get bored discovering new challenges and traps. The game becomes even more fun when more than one gamer attempts it at once, since everyone can compete for the highest score. Facebook feature can also be used in this regard.

It’s very easy to take part to the action with Fox Tales: Rocket Run. Once you click the “Start” button, you become immersed in the fun and adventurous quest. When you want the fox to fly, simply keep the screen pressed. When you want his to run on the ground, simply release your finger. However, take note that various traps are waiting to catch you unprepared. Spinning razors, incoming missiles and ground traps are all there to make everything more challenging. Players who exceed the distance of 1,000 meters can be easily deemed as skilled. 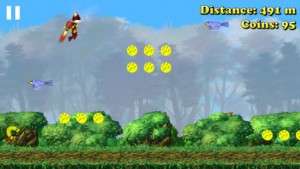 There is no limit to the distance which the fox can reach, although exceeding 5,000 meters is extremely difficult.

Fox Tales: Rocket Run is a game which manages to perform well in all chapters. The action is very well compelled, graphics are brilliant and seem to pop-out the screen while catchy tunes accompany player’s evolution. Definitely an addictive title to be played against friends or for the purpose of accelerating time passage. Everyone can download this game free of charge.

No Responses to “Fox Tales: Rocket Run – A Fast Action-Packed Game for iOS”