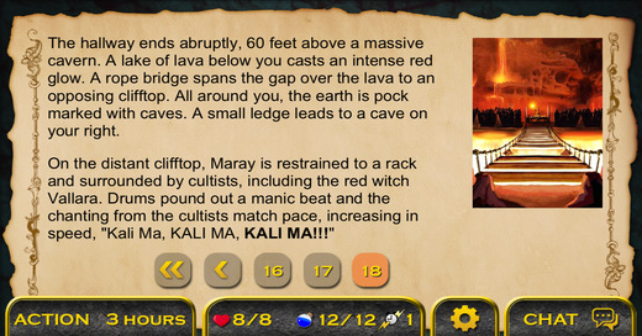 There’s plenty to like about role-playing games that have deep, immersive story-telling. This is apparent in classic games and D&D and the like. Nonetheless, Fire Gate is actually only vaguely similar to the said game, as evidenced by its fantastical elements and spellbinding narrative. It’s classified as a multiplayer RPG, but if you’ve been accustomed to the ones that concern direct action and freedom of movement, know that Fire Gate actually incorporates them in a manner

It’s essentially a Choose Your Own Adventure type of RPG, after all. You get to choose the class you want to play, though. And, at present, there are up to four you can select, namely: a swordsman, frost mage, cleric, and thief. Each one brings his or her own advantages to the table. The thief, for instance, could use his street smarts and cunning to gain discounts when transacting, attack from the shadows and even think up of more clever, alternative ways to solving a present crisis. What’s certain is that it’s better to adventure with your friends as it would only help you tackle every problem easier, considering the wide range of problems that all of your abilities combined would be able to cover and address.

Take note that each class has its own special abilities as well, and you can choose to level each one up as you complete a specific chapter. Each ability can be extremely helpful or useless, depending on the current situation or scenario you are in. This is why careful attention to the narrative is the key to coming up with better decisions. Also, take note that your character uses mana (energy) every time he casts an ability. He also has a health pool as well that you have to be mindful of, especially when battling monsters.

As you make specific decisions, you will find that you actually have a chance of gaining traits and items (armor, spellbooks, weapons, clothing, potions, to name but some familiar fantasy elements and tropes) with each one you make. All of these would affect how a specific action would turn out, and these factors are what truly make the game dynamic as you progress with your chosen Hero.

Not a lot of RPG games have the same enchanting storylines as the ones found in Fire Gate, and it is certainly one of the strongpoints of the game. Reading them really immerses the player in the fantastical world he finds himself in, and we equate it to nothing less than reading the best hard fantasy novels out there.

No Responses to “Fire Gate: A Classic Role-Playing Game with Riveting Story-Telling”