Bullet Bounce Pro is a 2D shooting with a simple design and great gameplay which are still missing with 3D games. The game is about killing human  bounce bullets to kill everyone arranged in different positions. Once you get to play this game, you feel yourself as an assassin. 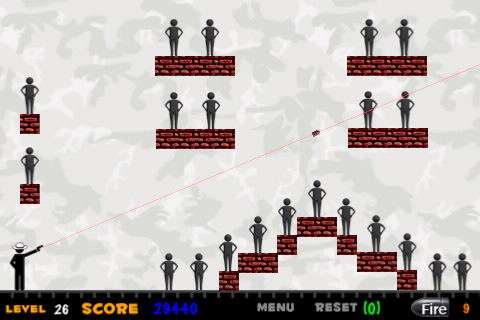 The game has the only control to change the direction of your aim. So all it requires is to aim better, as the bullets bounce by hitting the edges of the screen or through the bricks.

Bullet Bounce Pro has three different difficulty level with a total of 124 levels and 12 different scenes. For each game you get 15 bulllets and using those 15 bullets you need to finish the levels. So the more you save the bullets the more changes of getting high scores.

When I selected the difficulty mode to play the game, the first four levels were playable and the more I go forward the game was pretty hard to finish the levels using those 15 bullets. However the game becomes easy to play after 3 to four attempts.

Bullet Bounce Pro was a unique first player shooting app with more than hundred levels. but it seems most of the levels looks the same. The simplicity and its gameplay makes this game worth of considering. Thanks to the developers for releasing a lite version of this game, so give out a try for the free version rel=“nofollow>. If you loved it go for the pro.