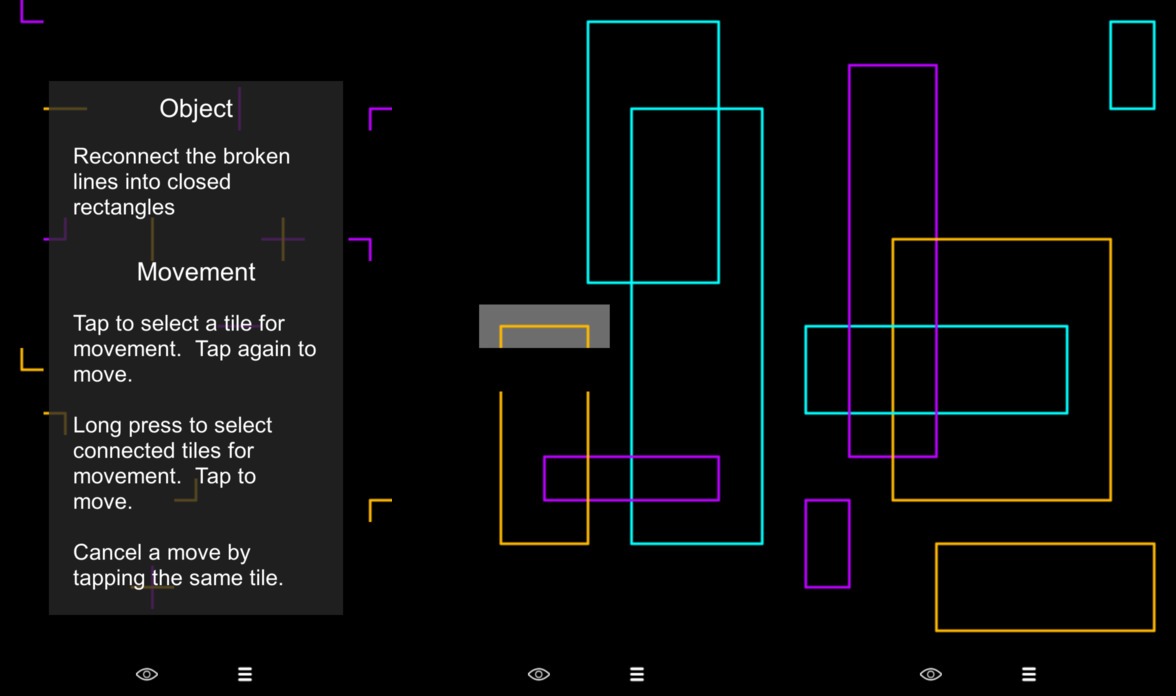 Nothing could be more entertaining than puzzle game apps. Most people prefer to exercise their mind while playing, so they also opt to play these kinds of games over others. Broken Lines is also a puzzle game app, but it focuses on geometric elements, particularly lines which you need to connect with one another to form completely closed rectangles.

The app is presented in a very minimalistic way. A single game consists of very simple graphics, which is doubly emphasized by its equally simple black background. The latter is very much important in highlighting the myriad colors of the lines that you need to connect with one another to form rectangles. With that said, the player should pay attention to the said colors since not only do they guide which ends of specific lines should be connected with one another but they also readily reveal the number of rectangles that you have to form in a single playthrough.

Upon starting a new round, you would immediately notice that not all the parts of the rectangles are composed of straight lines. Some come in the form of two connected lines, crisscrossed lines, two different connected with each other, and L-shaped lines. All of these parts would strewn in a rather disorderly manner across the game interface.

If you want to select a specific line to move, you only need to tap it once. Tap the position where you want to place it to move it there. If you mean to move lines that are connected to each other, then long tap it. If you want to cancel a move that you made, then tap the tile again. Any line that you’ve selected would be highlighted by a gray box.

A level finishes once you have selected formed all the rectangles that you need to form. As you play, you also earn peeks, which fulfill the function of giving you hints on how to complete a specific rectangle. You may even spend the peeks you’ve gained to restart a level with a portion of the puzzle solved for you. Difficulty levels are represented by numbers, the more you raise it, the more difficult every puzzle becomes. If you want to return to a previous level you’ve played, you may freely do so as well.

If Broken Lines is going to be compared with other puzzle apps, it certainly defines itself with its focus on the formation of rectangles. It introduces a relatively fresh twist to the average puzzle app. The fact that it incorporates an algorithm that ensures that no two playthroughs are alike adds to the re-playability value of the app as well.

No Responses to “Broken Lines: A Fun and Highly Original Geometry-Inspired Puzzle Game”