Many a times adventure games end up with killing people. I searched the App Store for a long time for an adventure game without blood and violence.

I think Boom Boat is a very good choice that would suit my 11 year old. It is all about bombing the oil gushers with a boat. As oil gushers are threatening the world economy and environment, the idea behind the making of this game is really impressive. 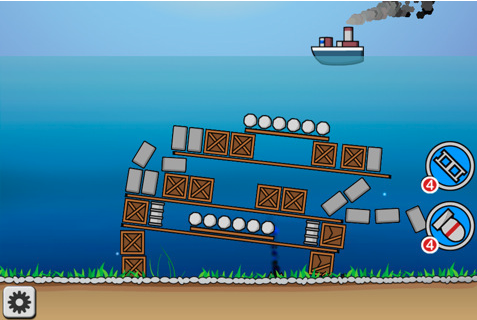 In this game a boat is given to the player for his/her epic adventure. He/she can control the movement of the boat just by tilting the phone. With this boat all the you need to do is bombing the oil gushers. You have to remove the blocks that saves the gushers from getting bombed. You can do this by various means including blasting them.

With exceptional designs showing the boat and pointing the oil gushers in the world map, it creates the right mood to play. It is simple, but not easy. It explains the game options with pictures, which I think is a good idea. This game has 30 levels and each level has three challenge objectives. You can grab up to 3 stars in each level and you have to grab all the 90 stars to stand out as the best out of the best. You can move to next level only after successfully completing the previous one.

This game was released few days back and there is no need for you to hesitate downloading version 1.0 as all updates would come at free of cost. It has comparatively less issues for a first version. Boom Boat is compatible with iPhone, iPad touch and iPad. It only costs you $0.99 to save the world from oil gushers.