Bibi Blocksbery iPhone app is based upon a German Story – Bibi Blocksbery. This is a popular German story which can be found on the Wiki. It is indeed an interesting read for anyone. Bibi Blocksbery app is actually based on a broom stick game where you need to race against your other friends at different places. In a way, it is about flying with brooms on your iPhone, iPod Touch and the iPad!

As I said the game is about broom racing, so initially the game looks pretty complicated while making turns during the course of the race. The main screen of the app has the main menu – Start Broom Race, Start Time Race and Settings. But before the main menu users are requested to select between German, English and French. 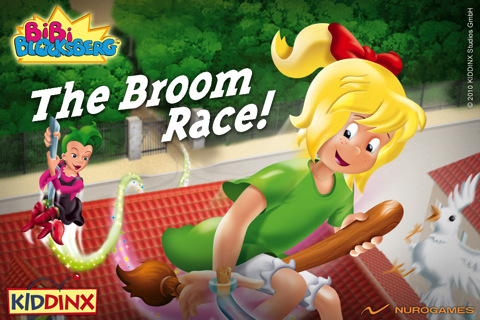 Bibi Blocksbery app has four characters including the little girl Bibi Blocksbery. Once you select the character, users are requested to select the location of the race. Then, the game starts. The controls of this game can be customized to use the accelerometer for making turns or we can have a manual control with a slider. The control functions can be found under the Settings category at the homepage. The two types of play are not so different except the time challenge and even the time challenge is restricted with a single level at a time. Both the types of game are pretty easy to play and you won’t find it tough except during the first two attempts.

The graphics is good and detailed. You can witness it while playing the game. The background sound is mediocre, but I feel it can be improved. The highlight of the game is the concept behind it. For a kid, this would be a favorite pastime – think, which child will not love flying around with a broom stick?

Overall, I felt Bibi Blocksbery is good to go and I hope the developers bring in more updates in the future.

No Responses to “Bibi Blocksbery – The Broom Race App Review”