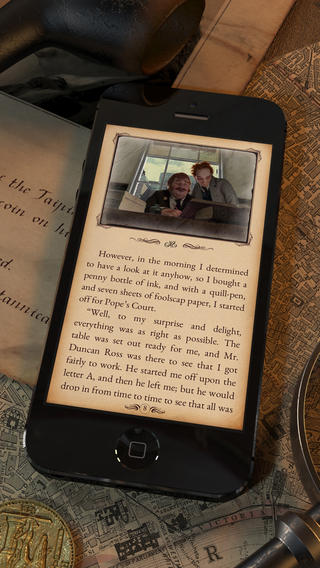 Despite many T.V adaptations and film versions, Arthur Conan Doyle’s popular book, The Adventures of Sherlock Holmes (1891), continues to attract readers all around the world. Have you wondered what it would be like to be a part of Sherlock Holmes’ detective adventures set in the 19th century? Try an e-book named Sherlock: Interactive Adventure to solve mysteries with Sherlock himself! 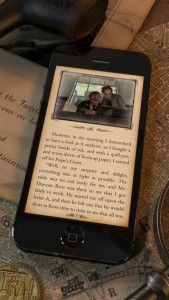 In this e-book you play the role of Dr. Watson, Sherlock Holmes’ friend who accompanies him in his detective activities. This participatory mode of narration brings a new dimension to readers’ comprehension. This form of narration enables reader participation, and adds an entire new dimension to the reading experience. The stories in the app are presented with 3D animation which provides a lively and interactive narration of the scenes. You can click on these 3D visuals to take a closer look at the characters and objects in the scenes. These visuals have been designed such that the streets, room interiors, clothes, signboards, furniture, weapons, characters’ hair styles and other objects portray 19th century London.

The app has plenty of interactive components which make you feel like you are actually in the Victorian era. It has the original text written by Conan Doyle. Along with the text, you have an option to listen to an audio narration. The narration by Simon Vance perfectly gels with the mood of various plots.

Each page of this interactive e-book comes with three options – Map, Dossier and Collection. With the 19th century vintage map of London you can go around the city to help Sherlock in spotting clues. The dossier section in the app gives you a brief intro to the characters in each scene. By tapping on the 3D pictures, you can zoom into them and find the clues. By clicking on the collection option, you can read about these clues in detail. 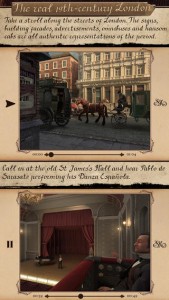 Sherlock: Interactive Adventure has an intuitive user interface that make navigation pretty easy. The app has 30 interesting plots with 3D action, and 20 original soundtracks of the 19th century. The soundtracks go well with the theme of the story. This app has options for social media sharing.

The free version of Sherlock: Interactive Adventure lets you access a limited number of plots, and unlock more with in-app purchases. You can read the entire story by purchasing the paid version for $1.99. “The Adventures of the Red-Headed League” is the only collection of stories available in this app for now, and I can’t wait to explore the rest of the collections. This app is currently available only in English and Russian, and developers could consider including other world languages.

Sherlock: Interactive Adventure is a visual treat for ardent fans of detective stories.

No Responses to “Sherlock: Interactive Adventure – A Digital Version of Conan Doyle’s Masterpiece”