National Debt for the iPhone – The Dept of 180+ Countries! 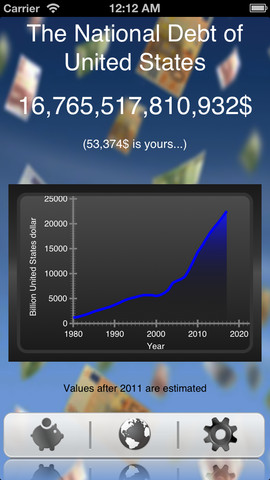 There are many ways one can become an effective citizen. In one way or the other, you have to be aware of how your country is doing on the global facet. A good example would be having enough awareness of how abundant or scarce the country is on a monetary note. With the National Debt app, discerning what countries excel and fall behind economy can be obtained with a couple of clicks.

The Conception of National Debt:

Living in debt is not new in this modern day era. As a matter of fact, more than 80% of the world’s population are highly and lowly trudging with different figures on a daily, weekly and or annual basis. May it be due to educational purposes, emergent situations and alike, almost everyone is attached to owed money. The conception of National Debt revolved around these factors. The best part is that it enlists all countries, allowing you to compare your own country’s standing and whether or not, it should be something to be alarmed about or not.

Knowing the sum of money your country owes can be very helpful on a personal perspective. Being aware lets you become a more responsible citizen, reflecting on questions like “Am I contributing to the country’s financial growth?” and “Am I adding up to the big pool of money it owes?” Using the app, you can determine the crude payment rate of your country or in other words, how much your country is paying and how much it grows on an annual basis. You may be shocked to know that your country’s debt is already China’s population raised to the power of 10. Not to worry you, but just saying. 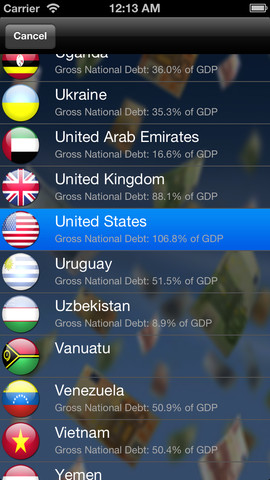 Going Beyond the Broad Scope, National Debt wants to get into more details. With that said, it is capable of:

* Putting huge numbers of national debts into perspective
e.g. The debt comes with the exact same value that of…
* 20 billion iPhones
* 900 billion Big Mac Meals and so on and so forth…
* Letting you know what other products could have been purchased with the amount of money your own or another country owes (say for example how many atomic bombs or Justin Bieber album’s could have been produced. A big LOL!)
* Letting you adapt so as to specify the items your own list carries

In addition, all data are approved by over 180 countries, which all prove to be reliable. With real-time info provided right to your iPhone, what more could you ask for in knowing your country’s financial status?

No Responses to “National Debt for the iPhone – The Dept of 180+ Countries!”