The All In One Music Player – Mosaic Player Pro 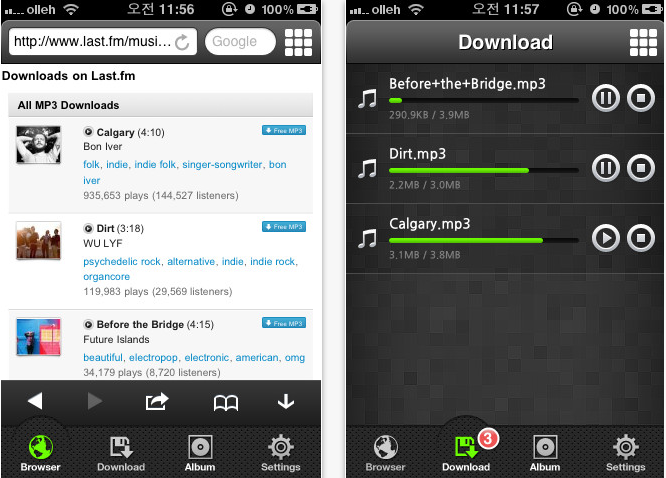 Normally iOS devices don’t allow users to add Web-downloaded songs to the playlist of the iTunes. To get them, songs should be downloaded to PC or Mac, added to iTunes and then synced with the iPhone. My friend told me that there is a way to bypass all these tiresome work and I was amazed when I heard this.

It is “Free Music Downloader with Mosaic Player Pro” by Cotton Interactive. I decided to give it a try without any expectation, but now I am pleased with its features. Mosaic Player Pro has a full-fledged web browser, download manager, album manager, mosaic player and an audio player.

Now let us see the features of this app one by one. The ‘Web Browser’ is very easy to use and users can save bookmarks and organize it using the ‘Bookmark Manager’. If they want to download a song from a website, they can do it just with a single tap. It is as easy as we do with the PC. When users start downloading a song, this app can boost the download speed, so that they can download multiple songs at once. It lets them pause, resume or cancel a downloading process whenever they want. During the downloads, Mosaic Music Player shows a download progress bar and it adds a download badge after the completion.

Users can also create albums based on the songs’ genres and can name them. These albums can be updated by adding songs and can be removed when they are not needed. Using the ‘Mosaic Player’ users can customize the songs, by creating playlist. All these playlists and albums will appear as mosaics in the opening screen of the app. It also has an ‘Audio Player’ to play the songs. Users can repeat and shuffle the songs. There is a background playback option (available for iPhone 3GS and later versions running iOS 4.0 or up) that helps in playing a playlist, album or a particular song in the background while using other apps.

After using this app, I have become a music crazy buff. So I recommend it to people who always like listening to music. Just give it a try and share your experience in the comments.