Kidtrol: Gives You All the Tools You Need to Exercise Better Control On Your Kid’s Tablet and Phone Usage 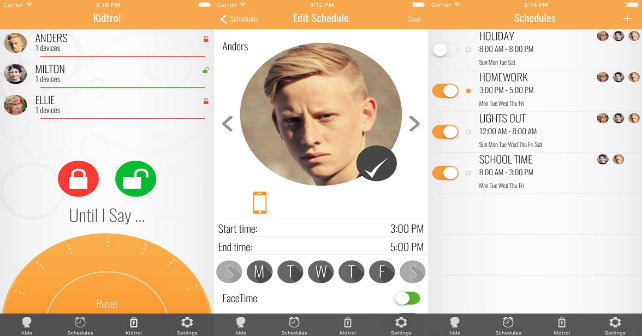 Any responsible parent would want to control their kids’ usage of today’s mobile devices. After all, with the amount of addictive games that abound in the App Store, it’s becoming increasingly difficult to tear you kids’ attention from them. It’s not only games that you should be worried about as well, as the Internet is ever easily accessible to content that is not at the least bit appropriate for children. The same goes for the time they spend on social media.

One of the best solutions parents can have for this is to simply use Kidtrol. True to its portmanteau moniker, the app pretty much guarantees that you’ll still be able to exercise parental control on your kid every time he uses any of your Apple gadgets. For one, you can actually use the app to set strict schedules of your kids’ device usage time. You can choose to disable specific apps and browsers to totally limit their usage times, especially if it’s a school week. The days and time of usage can be liberally set as well, which pretty much streamlines blocking and also helps you save on data consumption too.

It’s not all about setting block schedules, though, as you can also perform a block any time it is required. This is made possible by the ‘Block’ button and ‘Until I Say’ feature. The latter pretty much instantly locks the device, and it will remain that way unless you unlock it with the ‘UnBlock’ option. On the other hand, there is also a timeout feature, which allows you to set definite amounts of time that the device will be blocked; it will automatically unlock once the set time expires.

The app certainly shines when it comes to convenience because it also gives you the option to choose which phones and other devices to disable. You can assign the number of devices to your kids as well. Not only does the app provide a great way for you to limit your kids’ access to your devices, but it also serves as a great way to ensure that bedtimes, dinnertimes, and other activities beyond using devices are strictly followed too. This is thanks, of course, to the app’s built-in scheduler.

Other parental control apps lack the more in-depth scheduling feature of Kidtrol. The ‘Until I Say’ feature is also a stand-out, as this is definitely something that’s new in these types of apps. It may be present in other apps, but not in the same sophisticated way that Kidtrol incorporated it. It’s for this reason why this app is undoubtedly a step ahead of the rest when it comes to performing their primary function of making sure that your children aren’t spending excess time on their devices.

No Responses to “Kidtrol: Gives You All the Tools You Need to Exercise Better Control On Your Kid’s Tablet and Phone Usage”