rel=“nofollow>Yesterday when Twitter officially launched rel=“nofollow> the Twitter for iPhone app nothing really worked, most of us rushed to iTunes store to download Twitter app, but sadly due to some internal issues, the app download request failed. Today we are able to download the app from US iTunes store. If you already own a paid or free version of Tweetie, you can upgrade the app for free. The app has been changed comparing to the one that we had seen yesterday. 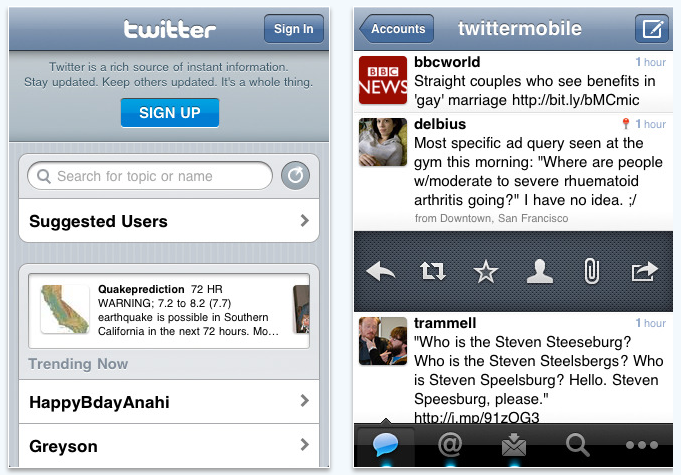 After I installed the app, I felt a lots of changes within the app

Once you sign in using your twitter id, you get a welcome screen with a list of popular Twitter users in categories. The categories include twenty useful list of suggested Twitter users. If you don’t want to see this welcome message, you can skip it by tapping on the skip button. Quote a tweet feature is pretty simple than quoting on Tweetie.

Overall I found the whole interface easy to use and I am really amazed with the faster response and that’s probably because of Twitter who uses their own algorithm for their Twitter iPhone app. After an hour of usage I didn’t find any fault with this app and it works far better than any Twitter app ever made for iPhone.